OK, folks, pull your chairs up to the table; it’s time for lunch. Today’s special is a big helping of 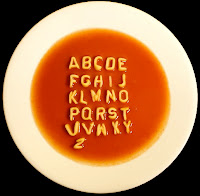 alphabet soup. It’s not exactly like the kind you had when you were a kid. No, this soup is specially made to save time and energy, often growing out of the tiresome and unwieldy labels one encounters in certain arenas of life. It’s just how everybody talks these days, OK?

Vernacular alphabet soup comes in two basic flavours: initialism and acronym. An initialism is “a group of initial letters used as an abbreviation for a name or expression, each letter being pronounced separately (e.g. BBC)” (Oxford English Reference Dictionary). Other common examples are CBC and  ER. An acronym is “a word, usually pronounced as such, formed from the initial letters of other words (e.g. Ernie, laser, Nato)”. (Oxford English Reference Dictionary)  More about acronyms another time.
Initialism alphabet soup takes many forms. There is sports soup – NHL, NBA, PGA, CFL – and government/military soup, such as OPP, IRA, KGB, MP, UN, CIA, and RAF. Then there are commercial/industrial soups, which include IGA, GT, GM, IBM, PR, and COD.
Alphabet soup has become so common you might have experienced a new linguistic malady called Alphabet Soup Confusion (ASC, for short), wherein one struggles with the increasing ambiguity of now overused initials. For example, who supports the WWF – wrestling fans or animal lovers? Is a PC better known to computer users or Canadian voters? And did you know that BC stands not only for British Columbia and Before Christ, but also Bachelor of Chemistry and Bachelor of Commerce? There’s probably something else, too, but not in my world. And anyone who enters a new field or job usually has to learn new terms, many of which are initialisms. The little critters can even be regionally or personally different; WW I and WW II are initialisms to some people but not to others. Do you say “dubya-dubya-two”  or “double-you double-you two” or “World War Two”?
I would be remiss if I didn’t mention Internet chat and texting lingo, which has taken initialism to new heights… well, places, anyway. It has become so much a part of Internet language that some chatters are forgetting how to spell. It’s possible that chat-talk can’t even be called initialism, because Internet chatters rarely use capitol letters; holding the Shift key takes too long. Here are some examples: brb (be right back), cu (see you), lol (laugh out loud) and 4u (for you). Even “okay”, which is often spelled “ok,” has been further shortened to “k.”
Now I have to admit that many of these chatisms (if they can make up “words”, so can I) are very efficient. Nevertheless, I can’t help but worry a little about where this rampant initialism is dragging our beautiful English language. It seems we can’t even take the time and energy to say four or five syllables just because two will do. What’s the big rush? I understand that when you’re chatting on the Internet or texting on your phone, you want to keep the conversation moving, and shortcuts help. Fine. But when you’re talking face to face? Are you going to walk out on someone who says, “I’d appreciate your doing that as soon as possible” rather than “I need that ASAP” because they’re taking too long?
I honestly can’t figure out what to make of the whole thing. I say TV, CAA, PEI, and CPR. And I am aware that contractions, which I use regularly, are a short form that someone probably objected to about 100 years ago. So what’s my problem? I guess it’s the part of me that doesn’t want this wonderful language to change too much. I sometimes feel sad to hear it misused so freely, because I like the sound of English when it’s used well.
Yet the irony is that I also enjoy the flexibility of English. I like making up words myself, as you may have noticed. So, I guess the only solution, as with so many conundrums in life, is to look after my own English and let everybody else look after theirs – unless they’re in my English class. Then they’d better watch it.
A little word challenge for word-nerds like me: Time yourself for three minutes and see how many initialisms you can write down, not counting the ones mentioned in this column.