Today's post is a tribute to my mother. She deserves it because, in addition to baking great cookies and driving us to school on rainy days, she taught my brothers and me to speak correctly. (And, yes, it is “my brothers and me,” not “my brothers and I.”) Of course, every time she corrected our grammar, we felt like we’d die of boredom. She was so predictable. My eyes rolled heavenward so often, it’s a wonder I can see at all. 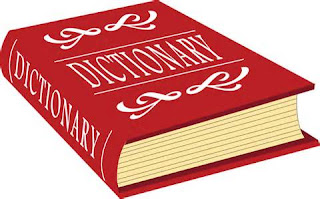 However, I did learn to be aware of language and began to play with words. In Grade 7, my friend, Jack, and I would look for cool words in the dictionary during English class – mostly dirty words and swear words. But as we giggled and blushed, we also discovered other weird and wonderful words in there. Besides, if the teacher came to check on us, we could smile angelically and truthfully say that we were just looking something up. I don’t suppose we fooled her, but we had fun and probably learned more than we cared to admit.
Today I have no trouble confessing how much I enjoy words – their origins, the way they sound, the way some of them feel in my mouth and throat. I love the pleasure of finding the precise word and rhythm, of creating or re-shaping them to fit my need. Another pleasure is discovering and musing about the history of a word or expression.

I should make it clear that I am not a professional lexicologist; that is, I don,t have formal training in “the form, history and meaning of words.” (Oxford English Reference Dictionary) However, I am an amateur one – a wordster, as it were. I made up that word to mean “a woman who is occupied or engaged with words.” If I were a man, I might call myself a “worder,” because up until about the 10th century, adding the suffix –ster to the end of a word changed it from the masculine form to the feminine. So a male weaver was called a webber, while his wife was a webster. A male baker’s sister was called a bakster. Eventually, many of these gender distinctions disappeared in English.

What doesn’t disappear from the English, or any language, is change. Words come and go, expressions are modified to serve a particular purpose at a particular time. A perfect case in point is “my” word, “wordster.” I genuinely thought I’d made it up, but I googled it (another new word) just to be sure, and there it was, though I no longer hope it applies to me! According to the online Merriam-Webster dictionary, a wordster is one who is "adept in the use of words, especially in an empty and bombastic manner." Hmmmm....

So very little is certain in the language game – which just makes it all the more interesting and, in my opinion, a walloping “wordventure.”
Posted by Kate Thompson at 06:54