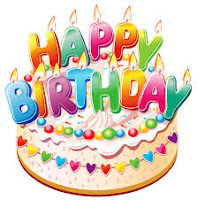 Today is my brother Bill's birthday, so in his honour I've investigated the word "birthday." In the late 14th century the Old English word byrddaeg was used to mark the anniversary of a king's or saint's birth. No such celebrations for the lowly peasants until about the 1570s. By the 1620s the term "birthnight" was also in use.

Not to make scandalous suggestions to my celebrating brother, but he (and you) might be mildly interested to learn that the term "birthday suit" showed up in the 1730s, if not before. A similar term in Middle English was "mother naked" – naked as the day one was born, of course. Middle Dutch had moeder naect, while German had mutternacht.

So there you go. Where 's the nearest Trivia Nacht?
Posted by Kate Thompson at 10:30