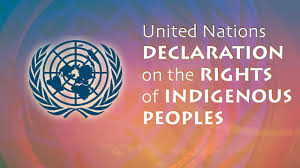 The proclamation would include, but not be limited to, the following commitments:

ii. Adopt and implement the United Nations Declaration on the Rights of Indigenous Peoples as the framework for reconciliation.
Posted by Kate Thompson at 05:49