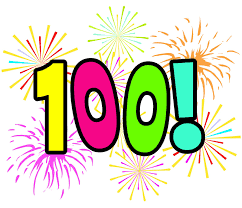 Today's post is my 100th #WordWednesday, so I thought I'd take a look at the words "one" and "hundred." They're so common that it seems a little odd to think about their etymology (origins), but…well…I'm a little odd, so there you go.

The word "one" showed up in Old English in about 1200. According to the Online Etymology Dictionary, "one" used to be pronounced the way we now say "atone" and "alone." An English friend of mine talks about children as "little 'uns," and others say "good 'un" or "young 'un." Our current pronunciation of "wun" came into general use in the 18th century.

Various expressions use the word: one-night stand (performance on stage) dates from 1880, while its more modern meaning of a sexual encounter came into use in 1963. In 1893 an agreeable fellow became known as "one of the boys." The drinking expression, "one for the road," came into use in 1950 as a song title.

The word "hundred" is an Old English word that has a long history in many languages. The common word for hundred in Old English was hund. The word's history includes a stint in Old Norse as hundrath, which meant 120 – referred to as the "long hundred" of six-score, a "score" being a group of 20. The hundred we know today was considered the five-score hundred and was referred to as the "short hundred."

So, this is my wun-short-hundredth #WordWednesday. Thanks for joining in.
Posted by Kate Thompson at 04:30