Depending on individual pronunciation variations, the following two common words are homophones (words that sound alike but have different spellings and meanings) or near-homophones: "bizarre" and "bazaar." However, they don't have related origins, though for a time linguists thought they did.

bizaare – This word means grotesque, odd or fantastical. Its origins date back to the thirteenth century when Italian people spoke of bizarro or bizza as having to do with quick flashes of anger. That meaning slowly evolved to mean "unpredictable or eccentric" and then, eventually, "strange or weird." And, so, to the present day. Maybe someday, given how ordinary the strange and weird are becoming, bizarre will end up meaning "same old, same old!"

Then there's bazaar. This word isn't nearly as old as bizarre; it comes from only the late 1500s. Just a kid, etymologically. Bazaar also comes from an Italian word, bazzarra, which itself came from the Persian bazar, which, in turn, stems from an older Iranian word for sale or traffic. 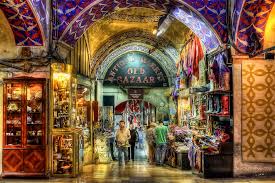