TRC Call to Action #53, regarding a National Council for Reconciliation 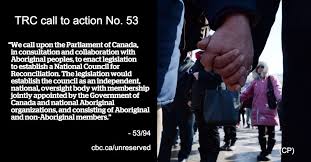 We call upon the Parliament of Canada, in consultation and collaboration with Aboriginal peoples, to enact legislation to establish a National Council for Reconciliation. The legislation would establish the council as an independent, national, oversight body with membership jointly appointed by the Government of Canada and national Aboriginal organizations, and consisting of Aboriginal and non-Aboriginal members.

Its mandate would include, but not be limited to, the following:

i. Monitor, evaluate, and report annually to Parliament and the people of Canada on the Government of Canada’s post-apology progress on reconciliation to ensure that government accountability for reconciling the relationship between Aboriginal peoples and the Crown is maintained in the coming years.
Posted by Kate Thompson at 05:01