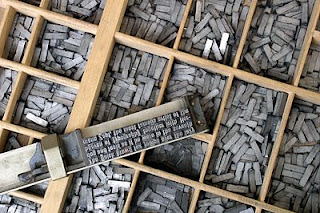 Two weeks ago I wrote about the ampersand, but it isn't the only symbol that is no longer part of the English alphabet. Alphabets and the languages that they symbolize change over time. The basic Old English Latin-based alphabet did not have a j, v, w, k, q or z, but it did have the ash ⟨æ⟩, eth ⟨ð⟩, thorn ⟨þ⟩ and wynn ⟨ƿ⟩.

One of the many factors that contributed to the changes was the invention and spread of the printing press. Originally, and for a long time, text that was to be printed as a broadsheet (newspaper), book or pamphlet was set up by a human typesetter. This person would insert individual letters, numbers and bits of punctuation (called sorts) onto a composing stick, each letter going in upside down and backwards so that it would appear correctly on the printed page.

Typesetters sometimes had to substitute a sort they did have for one that they did not. Done often enough, these spellings would have begun to look normal to readers and writers.

Another factor was the influence of other cultures…as is true in all times and all places. Different pronunciations, words and spellings were slowly adopted and adapted, changing ideas about what was normal.

So, sounds change, contexts change, meanings change... thereby meaning the addition or elimination of various symbols. I wonder what the English alphabet will look like in a thousand years?
Posted by Kate Thompson at 05:08