natatorium: One of my brothers sent around a photograph the other day...of a natatorium in Milwaukee, Wisconsin. Now, to my knowledge, I'd never heard that word before. Turns out that in the early 1900s, a number of large cities were building these indoor pools for their citizens. Natatoria were whole buildings that contained not only the large pool and, often, second floor galleries, but also showers and change rooms.

Originally, at least in Milwaukee, the natatoria were built to give citizens access to bathing and showering facilities, since very few people had such luxuries in their homes. Cleanliness was clearly deemed to be of great importance and had only in recent decades been tied to diminishing disease. Unfortunately, they didn't figure out right away that starting out with dirty water or admitting people in all states of health and ill health did not contribute much to improving disease statistics.

In any event, natatoria became quite popular and eventually changed into a source of recreation than cleanliness. Though many of the original buildings gradually closed or were re-purposed, the idea of communal swimming pools has never since then left us. 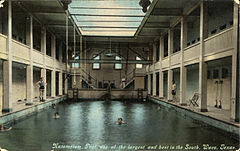 Email ThisBlogThis!Share to TwitterShare to FacebookShare to Pinterest
Labels: WordWednesday