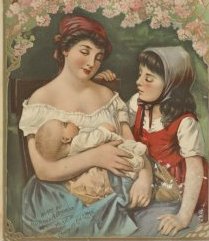 You have probably noticed the similarity between the words "coddle" and "cuddle." I always assumed that they came from the same source. They didn't. Even though they look and sound so similar and have similar meanings, they actually derive from two different linguistic sources. Naturally, I'm going to tell you more about that.

Since about 1600, the word coddle has had two meanings, the first of which I did not know. It means to simmer in water. The second meaning is the familiar one, to pamper or treat like a baby or invalid. I surmise that the second meaning might derive from the idea of the gentle simmering – gentle treatment. Coddle probably comes from the Anglo-French (c. 1300) caudle, a warm drink for invalids. Its ultimate source is the Latin calidium which is related to other words today, such as the English calorie, Spanish caliente (hot) and probably French chaud (hot).

Coddle's linguistic doppelganger, cuddle, means to lie close or nestle together and has been found as far back as 1520. It's probably a variation on the obscure words cull or coll, meaning to embrace, or possibly the Middle English word couthelen, from couth, which means known and, hence, comfortable with. Cuddle may actually be related to collar, the source of which is the Latin collare.

The backwards search goes further, but we all get the idea. Coddle and cuddle are not related. Oh, well.
Posted by Kate Thompson at 07:46